According to Groundhog Day tradition, if the groundhog sees his shadow the morning of Feb. 2, six more weeks of winter can be expected. An early spring will be on the way if he doesn’t see his shadow. With Feb. 2 being on the weekend this year, Concord Charlie decided to move his announcement to Feb. 3 for 2020.  Charlie has a standing appointment with the University’s President each year to offer his predictions and insights on the duration of winter. The President then relays the forecast to the breakfast guests.

Concord announced Walker’s appointment to lead the Mountain Lions in December. He comes to campus from Martinsburg High School in Martinsburg, W.Va. where he built the Bulldogs into one of the most successful programs in the entire history of high school football in the state.

Under Walker’s leadership at Martinsburg, the Bulldogs have won a total of eight state championships (2010-13, 2016-19) while playing in a total of 12 state championship games since 2001. Overall, the Pineville, W.Va. native amassed over 300 wins in 32 seasons as a head coach, including his time spent at East Hardy High School in Baker, W.Va. His 53 playoff wins between his time at East Hardy and Martinsburg are a state record.

In addition to his coaching duties in the state’s eastern panhandle, Walker was also Martinsburg’s Athletic Director and Assistant Principal.

Walker received his undergraduate degree from Glenville State in 1988. He earned master’s degrees from Shenandoah University in Education (1997) and Administration (2002).

At GSC, he was a two-time All-West Virginia Intercollegiate Athletic Conference (WVIAC) offensive lineman in 1986 and 1987. At the conclusion of his career, he received Glenville State’s Montrose Award – an honor given out to the top senior student-athlete for performance in competition as well as service and leadership off the playing field. Additionally, he is a 2016 inductee into Glenville State’s Athletic Hall of Fame. Before his playing days as a Pioneer, Walker starred at Pineville High School in Wyoming County.

The Concord Charlie tradition was originated in 1978 by the late Professor R.T. “Tom” Hill. As chairman of both the geography department and the Appalachian Studies program at Concord, Hill started the Groundhog Day Breakfast as a means to celebrate a bit of Appalachian heritage and highlight the program.

Cost per person for this year’s breakfast is $20. Reservations are required and may be made online at www.concord.edu/groundhog

Reservations may also be made by emailing advancement@concord.edu or calling 304-384-6311.

For additional information about the breakfast including payment options contact the Concord University Office of Advancement at 304-384-6311 or advancement@concord.edu 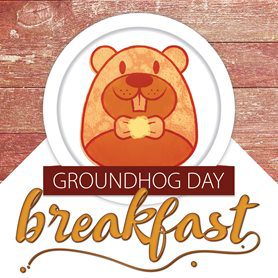