ATHENS, W.Va. – Melissa Stockwell, World Champion paratriathlete and United States Army veteran, will be the featured speaker for Concord University’s Veterans Day observance on Wednesday, Nov. 11, 2020. The digital program will be available for viewing online beginning at 9 a.m. on Nov. 11.

Stockwell is an American war hero who has triumphed over personal tragedy to achieve greatness and World Champion status, and has dedicated her life to chasing remarkable accomplishments while giving back to others, particularly those who face challenges similar to her own.

“It truly is an honor to have Melissa Stockwell speak for Concord’s Veterans Day ceremony,” Veterans Advocate George Williams said. “She has been through so much but has never given up, nor has she ever questioned her own patriotism. Her determination and perseverance against all odds should be an inspiration to us all.”

Dr. Williams, who is a veteran of the U.S. Navy and an assistant English professor, explained that the Veterans Day observance is an important event on Concord’s calendar each year for the University and surrounding community. While this year’s ceremony won’t be taking place live due to the COVID-19 pandemic, Dr. Williams says it will still be a fitting tribute to the service and sacrifice of those who have served in the U.S. military. He invites all veterans and military personnel to join Concord’s student veterans and the CU community on Veterans Day by viewing the ceremony online.

Instructions for logging in to the program will be posted on Concord’s website at www.concord.edu. The observance will also be archived on CU’s website for those who cannot watch at 9 a.m. on Nov. 11.

Melissa graduated from the University of Colorado in 2002 and was commissioned as a Second Lieutenant in the United States Army. In March 2004, she deployed to Baghdad, Iraq. Just three weeks later, a blast from a roadside bomb struck Melissa’s Humvee causing the loss of her left leg above the knee. After enduring numerous infections and surgeries, Melissa was medically retired from the Army. She is the first female to ever lose a limb in active combat. For her service she received the Bronze Star and the Purple Heart.

Following her military career, athletics become a way of life for Melissa. In April of 2008, she became the first Iraqi War Veteran to qualify for the Paralympics. She competed in three swimming events and was honored by her fellow Team USA athletes to be selected to carry the American flag in the closing ceremonies.

After Beijing, Melissa turned to the sport of Paratriathlon and is now a three-time World Champion. She was named USAT’s female Paratriathlete of the Year for two consecutive years and was twice nominated for an ESPY award.

In 2007, Melissa completed the prosthetic practitioner program at Century College in Minnesota where she learned to fit other amputees with artificial limbs. She is also a level 1 certified triathlon coach and co-founder of the Dare2tri Paratriathlon Club, helping others with disabilities enjoy the sport of triathlon and embrace active living. 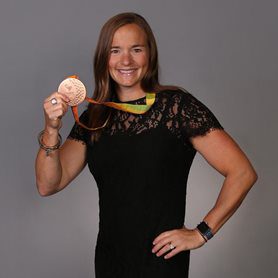