ATHENS, W.Va. – Family, love and loss are the makings of a powerful play that depict life on the home front during World War II.  War Letters is a short, one-act play directed by Concord University senior Theatre major Karissa Bowden for her Capstone Project.

This poignant play will bring a tear to the eye and a sense of family within. It will be presented on Zoom on March 12 and 13 at 7 p.m. and is free and open to the public. The Zoom number for this production is 923-2892-2540. There is no passcode.

War Letters is an historical play written by J. Robert Wilkins and produced in cooperation with Pioneer Drama Service. It is the story of a grandmother, mother, and son whose family member goes off to fight in World War II.  The family left at home must deal with his six-month absence, each facing the reality of separation privately.  Through correspondence and letters, the audience becomes privy to their fears, their hopes, their anticipation and ultimately their sorrow.  His wife, Karen, must take charge of the household and the family for the first time in her married life.  Lillian, his mother, is haunted by the memories of losing her own husband in war.  His son, Mark, struggles with her bitterness regarding his father’s absence.

This drama powerfully depicts not only the sacrifices made by soldiers but also by their families.  War Letters stars Lisa Coburn as the soldier’s mother Lillian, Melinda Goda as his wife Karen, and Cole Reed as his son Mark.  Funding for this performance has been provided in memory of Alice Todaro by her family.  Alice worked as a civilian for the U.S. Army for 20 years.  Her duty stations included Guantanamo, Okinawa and Kaiserslautern, Germany. Alice’s family feels that this play is a fitting memorial to their mother.

Bowden, who is from Union in Monroe County, is presenting War Letters as her Capstone Project. A Capstone Project, or internship, is completed by a senior approaching graduation. It is a culmination of their studies and helps them to demonstrate their proficiency and knowledge.

Karissa has been active in the Theatre and Music Departments at Concord University.  She participated in Choir as well as a number of plays including Godspell, Arsenic and Old Lace and performed as Violet Bicks in It’s a Wonderful Life. Currently, she is starring in Little Women in the role of Amy March. She is also an officer in Alpha Psi Omega, the national Theatre honorary society, where she serves as the Secretary and is the representative to the Student Government Association. Karissa is also a member of Nu Zeta Chi sorority.

For those who haven’t previously used Zoom, the software is free and simple to download by going to www.zoom.us. Then, simply type in the number for the Webinar (923-2892-2540). However, if you prefer a link to click, or need additional information, you may contact Karen Vuranch, Director of the Theatre Department.  She may be reached at (304) 384-5259 or kvuranch@concord.edu 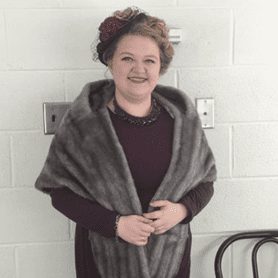