ATHENS, W.Va. – The Concord University Alumni Association (CUAA) recognizes some of Concord’s most outstanding alumni each year with a series of awards. Alumni who have made significant impacts on their community, who have had personal and professional success, and who have given back to their alma mater are selected for four different awards.

Presentation of the awards is a highlight of the CUAA’s spring Alumni Social each year. However, due to the COVID-19 pandemic, the social wasn’t held in 2020 and 2021. To still give the honorees their special time in the limelight, a decision was made last year to personally deliver the awards to each recipient.

The awards were presented this way again for 2021 by Sarah Turner, Director of Alumni and Donor Relations. As she visited the honorees and presented their awards, Turner spoke about why each individual was selected for the recognition. The presentations were captured on video, then recently shared on social media.

“Our alumni leave Concord and go out into the world and do all sorts of extraordinary things. I’m so glad the CU Alumni Association takes the time to recognize a handful of these outstanding alums each year and have been honored to be able to present these awards in person over the last two years,” Turner said.

Biographical information and photographs of each award recipient are included below.

Susan Tuck is a native of Monroe County in West Virginia who graduated from Concord in 1987 with a Bachelor of Arts in Communications. While at Concord, she was an active member of The Concordian staff and worked in several campus offices as part of the work study program. She was hired by Concord to serve as Director of Alumni Relations, a job which literally began immediately after graduation.

At the completion of her Commencement ceremony, Susan went directly to the Alumni Luncheon to begin her duties as Director, a position she held for three years She remembers those days as challenging but exciting times for Concord, as it embarked on an unprecedented fundraising effort spearheaded by then-president Dr. Jerry Beasley. One of the many facets of that effort was the creation of the Concord Phonathon, which utilized student volunteers to reach out to Concord alumni by telephone to solicit donations to support Concord and its students. One of her proudest accomplishments during her tenure as Director was organizing and overseeing the Phonathon, which exceeded its goals each year.

She also met her future husband Christopher when he volunteered with his fraternity to work at the Phonathon. After marrying in 1990, the couple moved to Lansing, Mich. so Chris could attend the Thomas Cooley School of Law. While they were there, she worked for the school, first as Director of Admissions and later as Director of Student Resources. After her husband’s graduation in 1993, the couple settled in the New River Valley near Radford, and she has served as office manager for his law office in Blacksburg.

Susan and Chris have two sons. One of their sons is a 2018 Concord graduate and it was during his time as a student that Susan resumed her involvement with the CU Alumni Association – first as a CUAA Alumni Council member at large, then as the organization’s President for two years. During her presidency, she was involved in a number of activities including offering alumni greetings at Commencement, manning the CUAA table at Homecoming, and attending off-campus alumni events. Her journey from student to immediate employee to engaged volunteer has been influenced the entire time by her passion for Concord.

Susan Tuck, left, receives the Alumnus of the Year Award from Sarah Turner.

The Outstanding Alumnus Award is given to a Concord grad who has made outstanding accomplishments in their professional and civic life.

Katrina Street Terry was born and raised in Princeton, W.Va. A 1986 graduate of Princeton Senior High School, she majored in mathematics and minored in computer science and statistics at Concord.

After earning a Bachelor of Science degree from Concord in 1991, Katrina received a master’s degree in Engineering Management from The George Washington University; a master’s degree in Cyber Warfare from the Air Force Institute of Technology at Wright-Patterson Air Force Base; and a Doctor of Philosophy, Educational Leadership, from Trident University International.

Colonel Katrina A. Terry has served in the United States Air Force since 1997. During her distinguished and decorated career, she has advanced through a variety of staff and leadership positions. Her duties have taken her from coast to coast in the U.S. with stops in the nation’s capital.

She is currently the Chief, Cyberspace Force Development Division and the Career Field Manager, Cyberspace Warfare Operations Officers, Washington, D.C. In this role she provides cyberspace organizational and force development guidance for 36,000 officer and enlisted members throughout the Air Force and Space Force.

From July 2019 until her most recent appointment, she served as Commander of the 628th Mission Support Group at Joint Base Charleston in South Carolina, a post she was competitively selected to command. Prior to this, she was one of only a handful of officers tapped for a yearlong Air Force research fellowship with the RAND Corporation, a global policy think tank in Santa Monica, Calif. At Vandenberg Air Force Base in California, she served as Commander of the 30th Space Communications Squadron.

When her military career took her to Washington, D.C., she served as the Cyberspace Capabilities Development Branch Chief, Joint Staff J-6, at the Pentagon. Her responsibilities included providing recommendations to the Chairman of the Joint Chiefs of Staff. As Director of Operations then as Commander of the White House Communications Agency, she provided direct communications support to the President of the United States.

Additionally, she received the General Daniel “Chappie” James Award of Merit in 1997 during Officer Training School. She was named the Outstanding Field Grade Officer of the Year for the 325th Fighter Wing Communications and Information in 2008 and for the 14th Air Force Cyberspace in 2013. In 2015 she received the Defense Information Systems Agency Technical Program/Project of the Year honor.

Golden Alumnus – Mario Ciarlo ’55
The Golden Alumnus Award is given to a member of the CUAA who has contributed their time and/or talents to Concord University and the CUAA with no less than 25 years of service to the University community.

Mario Ciarlo grew up in Waterbury, Conn. After graduating from high school in 1945, he enlisted in the U.S. Navy at the age of 17. He was stationed in the South Pacific for two years during his 1945-1949 tour of duty. Mario then began his long-standing history with Concord when he began working on his bachelor’s degree.

Having played baseball in high school and on the Navy League, it was only natural that he would play the sport for the Mountain Lions.  However, his studies and his collegiate baseball career were put on hold when he was recalled to active duty in 1951 during the Korean War.

Returning to Concord in January 1953, Mario secured his place in Mountain Lion Athletics history as a member of the 1954 WVIAC Championship baseball team, the first team at Concord to win a conference championship in any sport. He and his teammates were inducted into Concord’s Athletics Hall of Fame for this honor during Homecoming 2017.

Mario continues to speak enthusiastically about being a part of “the very special team of 1954”. Along with playing baseball, Mario was a member of Sigma Tau Gamma Fraternity.

After teaching briefly in West Virginia, Mario taught and coached for more than three decades in Waterbury. He served a variety of classes and grades and coached several sports there, including baseball, basketball and tennis, in elementary school through high school. Under his leadership, his teams captured several co-city championships. Mario also worked with the Waterbury Parks and Recreation Department from 1956 to 1987. During the summer, he supervised playgrounds across the area and in the winter, he ran indoor recreation centers.

When he retired in 1989, Mario was honored with a celebration acknowledging his 34 years of service with the Waterbury school system. As a lifetime member, past president and part of All-Star games for more than 25 years, he was inducted into the Connecticut High School Coaches Association’s Hall of Fame in 1995. For his military service, Mario was awarded the World War II Victory Medal.

Mario’s loyalty to Concord is strong and he is a dedicated ambassador for his alma mater. Supporting CU is important to him, he says, because he values the “first-rate education” he received that put him on his career path as an educator and coach. He enjoys staying connected to Concord by attending Homecoming and alumni gatherings in his region.

Young Alumnus – Lonnie Bowe ’07
The Young Alumnus Award is given to a Concord alum who has demonstrated distinctive achievement in their career, civic involvement, or both and who is no more than 15 years past graduation.

Lonnie has been very active during his time at Concord, serving on committees such as the Faculty Executive Board, Student Affairs Committee and University Technology Committee. He has also shown his support of students outside the classroom by serving as the faculty sponsor for organizations like SGA, Baptist Student Union and the Hopper Turing Society. Lonnie received the University’s Presidential Excellence Award during the 2016-2017 year, and maintains membership in a number of professional organizations, including the Association for Computing Machinery and the Computer Science Teachers Association.

His nominator wrote about him, “He puts in an extraordinary amount of time and effort into teaching and service. For a couple of years, while we were trying to hire new faculty, he WAS the Computer Science program. He is a strong mentor for new faculty and is extremely accessible to students, working patiently and at odd hours to help students complete their work.”

He was admitted to the New York State Bar and practiced at the law firm of Anelli Xavier, PC in Syracuse, N.Y. where he practiced private criminal defense prior to making his return to the Mountain State.  Ben was admitted to the West Virginia Bar and moved back to southern West Virginia in July 2011 when he took a job as an Assistant Public Defender of the 10th Judicial Circuit in Beckley, W.Va.  He worked at the Public Defender’s Office for over three years doing criminal defense work.  Ben left that job to start his own law practice that he ran from 2015-2016 where he focused primarily on criminal defense and working as a guardian ad litem for abused and neglected children in Child Abuse and Neglect cases.

It was in January of 2017 that Ben found his calling when he took a job with the Raleigh County Prosecuting Attorney’s Office where he prosecuted crime during the years of 2017 and 2018.  He then went to work with the law firm of Farmer Cline & Campbell PLLC doing personal injury and wrongful death litigation, working there from August 2018 – January 2021.

Ben always felt that his most valuable contributions to his community and to his profession was when he was prosecuting crime, so for those reasons he decided to file to run for Raleigh County Prosecuting Attorney.  He was elected in the November 2020 general election by 10 percentage points and took office on January 4, 2021.

He was formerly the Chairman of the Board of Directors for the Public Defender Corporation of the 10th Judicial Circuit and currently serves on the Board of Directors for the Raleigh County Day Report Center.  Ben has been named a National Trial Lawyer Top 40 Under 40 for Civil Litigation Attorneys not once but twice, and was also named one of the Top 10 Under 40 by the National Academy of Personal Injury Attorneys.  In his community Ben is involved as a soccer coach with the YMCA of Southern WV, a regular blood donor with the American Red Cross and a volunteer at his daughters’ school.

Please note that the state of the COVID-19 pandemic and Concord’s adherence to CDC guidelines
could impact how and if events are held. For the most up-to-date information, always check
http://www.concord.edu/About/Return-to-Campus-Plan.aspx 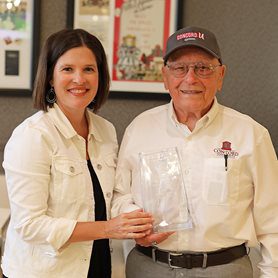