ATHENS, W.Va. – Colonel Jan Cahill, Superintendent of the West Virginia State Police (WVSP), has been named Grand Marshal for Concord University’s 2021 Homecoming Parade. The popular parade is set to make its way along Vermillion Street in Athens on Thursday, Oct. 7 beginning at 6 p.m.

Weather permitting, Col. Cahill will be escorted by multiple State Police Officers from the motorcycle detachment, based out of Charleston, W.Va.

Col. Cahill grew up in Peterstown, W.Va. He served three years (1983-1986) in the United States Marine Corps before going to college. His service included being stationed in Japan. Following his military duty, Col. Cahill attended Concord, graduating in 1991 with a Bachelor of Science in Education degree. His wife Selina is a 1989 graduate of Concord and was homecoming queen while on “The Campus Beautiful.”

Also a graduate of the West Virginia State Police Academy, Col. Cahill has taught Criminal Justice as an adjunct instructor at New River Community and Technical College and has served as a substitute teacher in Raleigh County.

He began his career with the WVSP in 1989 as a field trooper. He moved into leadership roles serving as Detachment Commander, District Commander and Drug Task Force Commander. When he retired from the WVSP in 2012, he was the Troop 6 Commander Captain in Beckley, W.Va. for the southern part of the state which included nine counties and 13 detachments.

He was elected Greenbrier County Sheriff in 2012 and reelected to the post for a second term in 2016. A highlight of his tenure as Sheriff was reestablishing the Greenbrier County Drug and Violent Crime Task Force. The United States Attorney’s office honored the task force in 2016 for the numerous convictions made involving the distribution of heroin and opioids.

Col. Cahill was appointed Superintendent of the WVSP in January 2017 by then Governor-elect of West Virginia Jim Justice.

He says that “after a year’s hiatus because of the pandemic” Concordians are excited to see the parade return.

Organizations interested in participating in the parade may register online at https://apps.concord.edu/forms/view.php?id=122885

Please note that the state of the COVID-19 pandemic and Concord’s adherence to CDC guidelines
could impact how and if events are held. For the most up-to-date information, always check
http://www.concord.edu/About/Return-to-Campus-Plan.aspx

Currently, face masks or face coverings are required for all individuals while in University facilities,
regardless of vaccination status. 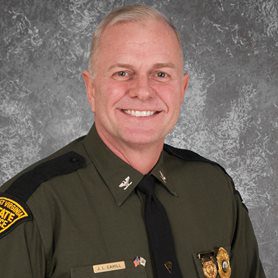