THE APPALACHIAN SHAKESPEARE PROJECT PRESENTS THE TRAGEDY OF RICHARD THE THIRD

THE APPALACHIAN SHAKESPEARE PROJECT PRESENTS
THE TRAGEDY OF RICHARD THE THIRD

Athens, W.Va.— The Appalachian Shakespeare Project celebrates its thirteen-year anniversary this summer with a new production of one of Shakespeare’s most popular tragedies, The Tragedy of Richard the Third.

The tragedy will be performed on Concord University’s campus in front of the Alexander Fine Arts building on July 29-30 at 6 p.m. and on July 31 at 2:30 p.m.

The Tragedy of Richard the Third is set amid the Wars of the Roses between the houses of Lancaster and York.  It tells the story of the infamous English king who schemes and murders his way to the throne, and his eventual downfall in battle.

“Richard the Third is one of Shakespeare’s most exciting tragedies, and we’re going to do our best to bring that excitement to life,” said Executive Director and Concord University professor Dr. Gabriel Rieger.  “Our production will feature Renaissance costuming and a significant amount of swordplay in the final battle.”

Karen Harvey, who made her debut with the Appalachian Shakespeare Project playing Gertrude in their 2019 production of Hamlet, is returning for another season.  This summer, she is taking on the role of Queen Margaret of the House of Lancaster, whose terrible curses foreshadow the tragedy which befalls the House of York. Karen is a longtime veteran of southern West Virginia’s local theatre community, and most recently performed with 4Pals Productions in Bluefield, Virginia.

“It’s a real pleasure to work with the ASP folks again,” said Harvey. “I look forward to it every summer now, and the stage combat takes it to a whole new level.”

The Tragedy of Richard the Third features one of the most famous battle scenes in all of Shakespeare.  This year, that battle is being choreographer by Rob Hall, an experienced director and fight choreographer who has worked with theatres and universities across America.

“”While this is my first experience working with ASP, I must say that I'm delighted with what I've found,” says Hall. “Coming from a professional and academic background in theatre, I wasn't sure what to expect from the company.  Richard III is a big show with a large cast, and a very large battle scene.  Actors are working to their strengths and are becoming better combatants each day.  We are going to have a huge battle with rapiers, broadswords, short swords, and quarterstaffs – it will be a sight to see!””

The Appalachian Shakespeare Project is a community theater organization founded in the summer of 2010 to present actor-and-audience-focused outdoor performances of Shakespeare’s plays in order to provide the community with an enjoyable and educational theater experience. Audience members are encouraged to bring camp chairs and blankets, and to come early with picnic dinners.  The show has an estimated running time of approximately two and a half hours. 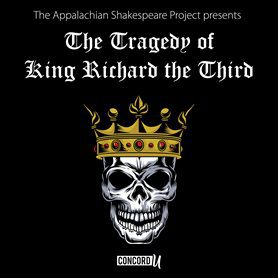