Tartuffe is a classic play by Renaissance comedic playwright, Moliere. Concord University’s chapter of the national honor fraternity, Alpha Psi Omega, will perform this play about a foolish man who is duped by a religious con man.  The play has been edited for modern times by Concord University senior, James Wilburn Jr., who is also the producer and co-director of the show. Performances will be presented on Alpha Psi Omega’s YouTube and Facebook on April 1, 2 and 3 at 7 p.m. All showings will be free and open to the public.

Tartuffe is a comedic play, written by Jean-Baptiste Poquelin, or more commonly known as Moliere, about family connections and the power deceptions and false beliefs have over it. The father of the house has been charmed by a charlatan that claims to be a “man of God” while this man secretly is lusting after the father’s wife. His family and friends try to bring him out of his delusion, but that only creates a bigger rift in the family dynamic. Will he listen to his family, or shall he lose everything to his newly found beliefs?

Tartuffe is directed by Concord University students James Wilburn Jr. and Cameron White. Wilburn is from Van in Boone County, and White is from Lerona in Mercer County. Wilburn is producing the play to fulfill his capstone requirements for graduation. Wilburn is also starring as the lead character, Tartuffe. He will be joined by Ross Cline who will play the role of Orgon, the fooled man and, and Sloan Young, who will play Orgon’s wife, as well as other Alpha Psi Omega’s members. The show was funded by a grant from the national offices of Alpha Psi Omega.

The project will be filmed for streaming by White and other communication arts and media majors. The show will be released on Facebook and YouTube on April 1, 2 and 3. The performance will stay posted on the YouTube channel.

The links for Alpha Psi Omega’s pages are located at: https://www.facebook.com/ConcordAlphaPsi
and https://m.youtube.com/channel/UCCW2QlbigaZfEhSrm2L-OTA

This press release was written by Concord University student, James Wilburn Jr.
Persons with disabilities should contact Nancy Ellison, 1-304-384-6086 or 1-800-344-6679 extension 6086, if special assistance is required for access to an event scheduled by the University on campus. 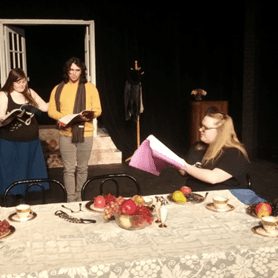